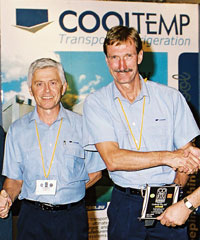 Bevan Carrick, an engineer, and Steve Whitelock, a former boilermaker, came up from Sydney and joined forces only in 1984 to establish Cooltemp Pty Ltd as a private, Australian owned company. Their vision was to produce after-market automotive air-conditioning systems for all makes and models.

Bevan had already established himself in business in 1977 with Summercool, an air-conditioning installation firm and it was from these humble premises in Castlereigh Street in Milton that the story of Cooltemp began. Bevan and Steves willingness to give things a go fast tracked their success and in 1985 the first move to larger premises was made.

Three years later the company was divided into manufacturing and installation, and the first of four buildings was built on industrial development land in Darra. Now well recognised for their design capability, the business was booming. This meant expansion for the manufacturing operation, and so in 1991 a second building, their Aluminium Brazing Plant was built.

By 1995 Cooltemp were building their own Head Office, bringing the undercover area of their Brisbane based facilities to 13,000 square metres. Over the next fourteen years Cooltemp Pty Ltd gained a reputation as a leader in design, manufacture and supply of high quality products both locally and internationally. This reputation is maintained through Cooltemps in-house expertise in the tooling, design and manufacture of its own components including; aluminium serpentine heat exchangers, sheet metal components, refrigeration hose and pipes, electrical harnesses, plastic injection products, and aluminium brazing.

Cooltemp awarded ISO9001 quality accreditation in 1995 and soon after they developed into transport refrigeration. In 2000 the first of the TR range was on the market and by mid 2001 the TR product range numbered five and continues to grow.

The decision to pursue QS9000 (the automotive industry quality standard) was made in late 1999. By July 2000 Cooltemp was awarded certification. The high ideals set by Bevan and Steve have been an inspiration to VASA members. They are highly regarded for their perfectionism and their toolroom is the envy of many Australian Companies. They now operate four Brisbane based facilities and employ 180 staff.

They have achieved significant international market penetration for supply of air-conditioning systems and components and for that, they, VASA and Queensland should be very proud.