Mark Padwick’s involvement with VASA goes back to the very beginning, when Sanden 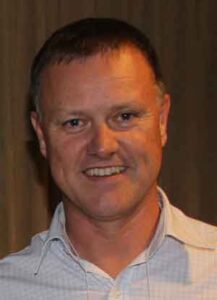 Norman went overseas soon after and Mark Padwick stepped into the role of VASA representative.

He originally served on the New South Wales state committee of VASA in those formative years when our state committee system worked hard to establish VASA’s credentials.

Except for a couple of years in the late 90s, when Mark admits he was somewhat disillusioned with what he interpreted as a boys club, he has been a staunch and untiring advocate of the VASA ideals, but much more than that – he has devoted so much time and effort in representing VASA at the highest levels of government and industry, the pinnacle of which was his election as Chair of the Australian Refrigeration Council, the body which administers the Australian licensing and authorisation system on behalf of the Commonwealth Government. This association has resulted in VASA having a direct hot line into the government and with senior industry leaders and it was an appointment which made everyone sit up and take notice of VASA.

Mark’s role in the ARC will end in October, when he must relinquish his position because he has served his full term.

He admits the organisation has grown into a strong industry group, thanks to the involvement of workshop members on the Board of directors. While there’s nothing wrong with wholesaler or manufacturer members being on the Board (in fact it’s very necessary to have such members on the board), there is a perception that the organisation should have a majority representation of workshop members, and that’s what we now have, with five of the seven members operators of retail workshops.

When VASA founder Mark Mitchell vacated the President’s chair after ten years, in 2004, Mark Padwick was elected in his place. After all, he was an obvious choice.

Then in mid 2009, Mark stood aside from the presidency and Ian Stangroome was elected President. Mark assumed the role of vice-president, a position he has held since.

Note: Norman Bilton, in retirement in Sydney penned this anecdote which was read at the awards ceremony.

This story illustrates the dedication, drive, tenacity most assuredly, loyalty which Mark has maintained under duress on many occasions, during his long working carrier, predominantly with Sanden International.

I first met Mark in 1980 when he was just entering his 20s. He was single and carefree. He was working at Mark IV in Caringbah. I believe it was his first step into his working life.

Well. One fine day Mark was sitting opposite me in my office. Coincidentally I had just recently been transferred from Sanden Singapore as the new GM of Sanden Australia.

In hindsight, I think it was Mark interviewing me, and not the other way round!

I asked him what he would wish to achieve if he worked for Sanden. His reply was quick and firm. “I want your job”!

I looked at him somewhat in surprise and thought to myself “Not bad mate, but not too soon. I have only just started warming the seat for myself.”

Needless to say I hired Mark and he joined us just prior to his 21st birthday. He eventually got his wish.

He did get my job and I think he got a great deal of satisfaction in calling me to tell me the news, which believe me made me most proud.

The Board of VASA, representing the entire membership, present and past, having benefitted from his knowledge and sage advice, have declared Mark Padwick a Legend in his own lifetime.