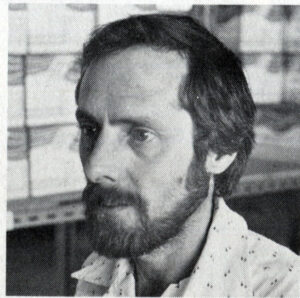 Roy Brown has been called by those who have known him for years, a creative engineering genius.

The fact is, he is not an engineer, but an electrician. Everything he knows about auto air conditioning systems and that’s considerable he’s learnt the hard way, all by himself. In his native England, Roy was an electrician in the railways. When he moved to Australia he worked as maintenance electrician at a Sydney hospital.

Around 1980, Roy began with AMC in Sydney. In the years when the design and manufacture of aftermarket systems was a lucrative pursuit for innovative engineering companies, Roy Brown was in there, solving problems and designing complex units to fit ambulances, Land Rovers and other special vehicles.

For as long as anyone has known him Roy has worked at AMC Holdings Pty Ltd. In the heyday of aftermarket manufacture, the company held major contracts with OEMs including Mazda. It was Roy that held all these together, first as designer, then as manufacturer, then as manager and finally as salesman.

His whole life has been in the design of air conditioning systems for all manner of vehicles. In doing so, he became a modest expert and around the industry he earned great respect and friendships with some of the major wholesalers and suppliers in the country.

In later years, he was designing special systems for back hoes and bob cats which would act as dust inhibitors as well as cooling systems. At AMC, Roy was production manager and then, about ten years ago, Roy and a co-worker Barbara Beech, the Sales Manager, were asked by management to take over and rule jointly. They had no management experience but between them the company survived. Barbara took early retirement, leaving Roy to manage on his own.

He was highly regarded by his fellow employees and he is well known for treating everyone right. They, of course, saw him as a mad professor, especially when he was flying around on a fork lift.

He was quite accident prone, having fallen from the mezzanine floor when sober. He has stuck his fingers into many machines over the years, almost severing a few on the way. He was rushed to hospital more than once to be stitched together again and turning up for work the next day like nothing had happened.

Tonight, the eye patch is just another normal episode in Roy’s life, the result of a wild okkey strap.

Roy, your many friends in the industry believe you have deserved an award like this for years. We are very pleased to be able to do tonight and we wish you well for the future.