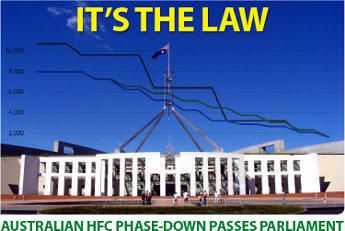 OFFICIAL: Australia will begin phasing down imports of HFCs including R134a from January 1 2018, a year ahead of the schedule for developed nations set under the historic Kigali amendment to the Montreal Protocol that was agreed by 196 countries in October 2016.

It opens the door for new regulations to be drafted and implemented, including the potential for equipment bans that would make it illegal for cars using R134a in their air-conditioning systems to be imported.

VASA would support a European-style regulation mandating all new vehicles sold in Australia from 1 January 2020 to have a refrigerant with a global warming potential GWP of no more than 150.

Meanwhile, New Zealand is going through the industry consultation process as it prepares legislation that will enact its HFC phase-down and ratify its obligations under the Kigali amendment to the Montreal Protocol.

VASA New Zealand director Catherine Tocker has made a submission to the Ministry for the Environment.

Read full details in the June/July 2017 edition of SightGlass News.