Despite winning 2019 World Car of the Year, 2019 European Car of the Year and numerous other accolades, the Jaguar I-Pace does not fit the Oxford Dictionaries definition of a car as it is not powered by an internal combustion engine. 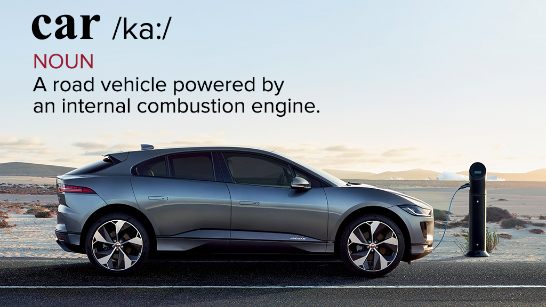 As such, Jaguar has launched a campaign to have the definition changed.

The current definition of a ‘car’ on OxfordDictionaries.com, a collection of dictionary websites produced by Oxford University Press is: “A road vehicle, typically with four wheels, powered by an internal combustion engine and able to carry a small number of people.”

Surprisingly, given the far slower uptake of electric vehicles on Australian roads, the Australian Macquarie Dictionary is apparently less hung up on the use of an internal combustion engine and defines a car as: “A vehicle, especially one for passengers, carrying its own power-generating and propelling mechanism, usually an internal-combustion engine, for travel on ordinary roads”.

That said, the Oxford English Dictionary, considered the principal historical English dictionary and widely regarded as the accepted authority on the English language, has a similar definition: “A road vehicle powered by a motor (usually an internal combustion engine) designed to carry a driver and a small number of passengers, and usually having two front and two rear wheels, esp. for private, commercial, or leisure use.”

Jaguar has submitted a formal application to the Oxford English Dictionary and OxfordDictionaries.com to have the definitions updated so they include additional powertrains. While these submissions are under review, the company is encouraging the public to join the campaign on social media by using the hashtag #RedefineTheCar.