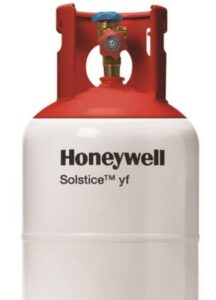 Among these investments, Honeywell will construct a high-volume manufacturing plant using new process technology at the company’s existing Geismar, Louisiana, refrigerants manufacturing site, which is expected to be fully operational in 2016. The exact size of the plant will depend on supply agreements that Honeywell is putting in place with major customers.

“Demand for HFO-1234yf is increasing around the world in response to concerns about greenhouse gas emissions and the need to comply with the Mobile Air Conditioning (MAC) Directive in Europe and Corporate Average Fuel Economy (CAFE) regulations in the U.S.,” said Andreas Kramvis, president and chief executive officer of Honeywell Performance Materials and Technologies. “After many years of analysis by the automotive industry, policymakers and environmental groups, it is clear that HFO-1234yf is a safe, effective and robust solution to address global warming and fuel efficiency. Honeywell’s investments will ensure adequate supply to meet growing demand.

“A significant portion of European demand for the current automobile refrigerant, HFC-134a, is currently supplied from the U.S., so our new production plant in Louisiana will mirror this arrangement,” Kramvis said. “However, Honeywell is also looking at the possibility of building a plant in Europe, but this will be driven by demand and the requirements of that market.”

HFO-1234yf is being adopted by automakers in part to meet the EU MAC Directive, a landmark piece of legislation that aims to reduce greenhouse gas emissions of air-conditioning systems in passenger cars and light commercial vehicles.

The directive requires that refrigerants in all new vehicle types sold in Europe after Jan. 1, 2013, have a global-warming potential (GWP) below 150. GWP is a relative measure of how much heat a greenhouse gas traps in the atmosphere, with carbon dioxide setting the comparison with a GWP of 1. HFO-1234yf offers a GWP that is less than 1, giving it even less of an environmental impact than carbon dioxide.

All cars sold in Europe after 2017 must meet the new GWP requirement of less than 150. HFO-1234yf, with a GWP below 1, not only meets this requirement but is more than 99 percent below the new, stricter regulation.

Automakers in the U.S. are also adopting HFO-1234yf to help comply with CAFE and vehicle greenhouse gas standards, which aim to improve the average fuel economy and reduce greenhouse gas emissions associated with cars and light trucks. Because HFO-1234yf has an extremely low environmental impact (a GWP of less than 1 compared with a GWP of 1,300 for the current refrigerant, HFC-134a), the U.S. Environmental Protection Agency (EPA) allows automakers to receive credits for using HFO-1234yf.

Nearly half a million cars are on the road today using HFO-1234yf. Third-party data shows that HFO-1234yf’s widespread adoption globally would have the greenhouse gas equivalent of permanently removing more than 30 million cars from the road worldwide, or about 3 percent of the total global fleet.

Earlier this year, Honeywell announced the launch of packaging operations for HFO-1234yf in Japan to better serve the market in Asia.

HFO-1234yf has the proven ability to perform as an effective automotive refrigerant in all regions of the world, and Honeywell continues to develop a global infrastructure to support its global customer base.