VASA honoured its former CEO and communications consultant, Ken Newton, with its 2013 Legend 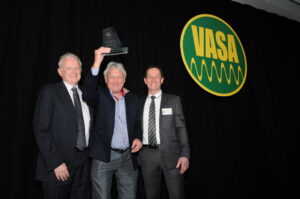 Award – granted only to three others in 20 years. They were VASA founding president Mark Mitchell, VASA pioneer, director and industry representative Mark Padwick and the late Frank Allison of the now defunct IMACA in America, who nurtured VASA in its early years.

“While Ken has always been a paid servant of VASA, the organisation may never have got off the ground without his enthusiasm and corporate guidance, not to mention his ability to very quickly put very readable submissions, news releases, websites and newsletters together with apparent ease and accuracy,” said Mark Mitchell.

Mark said Ken had written almost every word in every edition of Hot Air, and had fought VASA’s many fights using only his typewriter and media knowledge.

His award reads: In recognition of your dedication, guidance and loyal commitment to VASA and its members. Through your unparalleled skills as an influential communicator, you have positioned VASA members as a group of highly respected professionals.

In thanking VASA for the honour, Ken, who finished his 20 year tenure with the company at the end of Wire & Gas 2013, said that he valued the many friendships he had made within the membership.

He said VASA was lucky to have so many dedicated stalwarts who stood by their network through thick and thin.