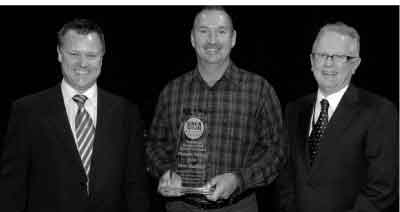 The late Ken Rudder, of Sydney was regarded as a pioneer of the purest form because he started in auto air in 1967, when the industry was barely five years old.

His award was accepted at Wire and Gas convention by Ken’s brother, Elton Rudder, who also runs an AC workshop north of Sydney.

Ken began in the industry in 1967 and up to 1972 was in his first auto air job at Air Pty Ltd, Parramatta Road, Camperdown. In 1973 Ken and his partner Peter Austin started All Car Air conditioning in St Peters and moved to Marrickville in 1978. In 1979, Ken sold his interests to Peter, and started Prestige Auto Air Pty Ltd with his partner David Cannell.

In 1982, he bought out Dave’s interests and continued the business until it went into liquidation in 1999.

He started Avken Products, at Prestons, where he traded until 2002. Ken then started Vancool, which is still operating today.

His first business had grown rapidly with the popularity of Mazda and the rotary engine models which most others at the time found too risky or too difficult to air condition.

Ken Rudder developed a determination to fabricate everything in house. His desire to be independent was paramount.

Ken was always looking for that little extra to add value to his products. Ralph Cadman, another great pioneer who imported and distributed Unicla compressors, recalls Ken’s obsession with shiny bolts. Unicla mount and drive kits were full of shiny bolts, but there was a shortage of them in Australia.

In an effort to make his brackets look better, Ken would appear at Unicla’s back door, pleading with Ralph to lend him some shiny bolts.

Always ambitious, sometimes beyond reality, Ken’s expansion into the larger premises of Prestige Air was a stepping stone towards something bigger.

Prestige became the titan of the industry for all the AC applications that were too hard’. It was remarkable what Ken Rudder could build, and he did build the whole system except for the compressors and cores.

And from doing all this complicated, hard stuff, he just carried on air conditioning anything that moved and that included backhoes, trucks, tractors, sweepers and fridge vans.