TWO significant documents to our industry have been published in recent weeks, the Review of the Ozone Protection and Synthetic Greenhouse Gas Management Programme options paper and theAnalysis of Work Health and Safety Data for the Use of Synthetic Greenhouse Gases and Substitutes in the Refrigeration and Air-Conditioning Industry.

Core to the Ozone Review options paper are the phasedown of high global warming potential HFCs such as R134a and reforms to the way refrigerants and other ozone depleting substances (ODS) and synthetic greenhouse gases (SGG) are regulated.

Disappointingly, federal regulation of additional substances (such as hydrocarbons) and increased powers for industry licensing bodies (such as ARC) were filed in a part of the options paper entitled ‘measures considered infeasible’. 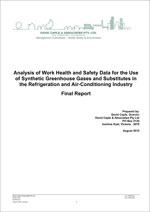 The good news is that the options paper is not the final government position and has been published to seek industry input. The deadline for submissions is November 16 2015 and VASA will be providing feedback. VASA members are also encouraged to review the options paper and related documents at:tinyurl.com/OzoneReview.

A separate report commissioned by the Department of the Environment into the workplace health and safety risks associated with the use of alternative refrigerants, could still influence the Ozone Review.

Conclusions of the report are not as definitive as industry would have hoped, but it provides a useful first step in demonstrating that the current federal and state government positions of doing little to nothing about regulating hydrocarbon refrigerants is unsustainable.

The report highlights the lack of refrigerant identification equipment used in the automotive air conditioning sector and the lack of national governance for flammable refrigerants resulting from the system regulating only emissions of SGG and ODS and not safety.

Comparing Australia to other markets, the report concludes that in Europe and Japan technicians are more likely to follow manufacturer recommendations when it comes to refrigerant choice and that Australia is more like the United States in that older, out-of-warranty equipment is most at risk from the use of cheaper non-standard gases such as hydrocarbons.

The report acknowledges that safety incidents involving hydrocarbon refrigerants have occurred but says these risks have not been “identified as a priority area by the WHS regulators, or the gas or electrical regulators in Australia”.

“This project has identified the requirement for the industry to work to increase knowledge and competency, particularly with RAC designers and technicians for the safe handling of alternative gases within the global context of moving towards lower GWP products.”

The report can be downloaded at: tinyurl.com/RACWHS.

Full details of the Ozone Review options paper and work health and safety report will be published in the November edition of SightGlass News.