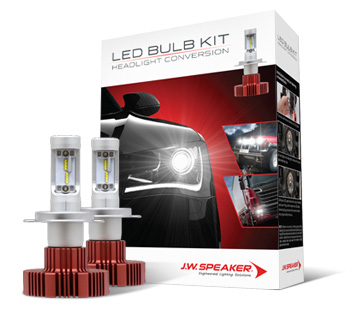 When installing a pair of JW Speaker LED H7 globes to the low beam of a Holden VF Holden Commodore, it threw a “Check left/right dipped beam globe” fault on the multi-function display in the instrument panel.

Richard said the globes do not need a Canbus adaptor loom in the VF, but they do require a resistor load loom fitting to avoid the fault.

However, he warned that the resistors run incredibly hot and luckily had the setup running unmounted for testing purposes. How hot? Richard’s equipment registered a searing 217 degrees, but not before he had copped a burn when accidentally brushing the resistor with his finger.

The heat issue makes it important to not cable-tie the resistor to an existing loom or screw it to one of the many plastic surfaces found in the engine bay of a modern vehicle, particularly around the headlight assemblies.

“These load resistors are operating in the upper end of their specs, so this temp is acceptable and normal,” said Richard.

“If you do not mount these load resistors to a metal surface to disperse the heat generated, you might just end up with a fire or damage to plastic components or looms.”

He urged people using these LED globes and resistors to “ve very careful and if you have installed them in the past it, might pay to recall the vehicles for a check or rework”.

Richard noted that the load resistor packaging carries a written warning: “The resistors in this kit become very hot when in operation. Fasten to METAL parts only. Do not fasten to plastic or other wiring.”

In subsequent discussion on SightGlass Live, Ray Kent of Bendigo Auto Air said he had H4 units fitted to his Ford Transit, which were good in the dry but did not seem as good in wet weather as the HID 4700K globes previously fitted.

VASA members can join the SightGlass Live conversation for free at www.sightglasslive.com.au