Automotive News Europe (Aug 24, 2013): Toyota says it has switched back to using the air 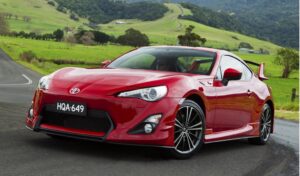 conditioner refrigerant R134a for some Toyota and Lexus models in Europe – in response to public pressure in Germany.

R134a has been banned from new vehicles built in the EU since the start of the year to help meet climate protection targets.

Until Toyota’s decision, Daimler was the only automaker that refused to phase out R134a. Daimler claims the only available replacement, R1234yf, poses a potential fire hazard.

A Toyota spokesman said: “We have equipped three models with the old refrigerant in order to respect our customers’ safety concerns because of the controversy in Germany.”

Toyota is still “very confident” about the new refrigerant’s safety but the company wanted to avoid being drawn into the debate about its use, he said.

Toyota is no longer producing any vehicles for Europe with R1234yf, which is manufactured by Honeywell and DuPont. Previously, the Toyota Prius Plus, GT86 (pictured) and Lexus GS were all equipped with the chemical.

Toyota can refill these models with the previously used R134a, because the relevant approvals to use the old refrigerant in those models are still valid, the Wall Street Journal reported.

Daimler is challenging a French ban on its Mercedes cars that use the old refrigerant. Authorities in France have refused to register Mercedes A-class, B-class and CLA-class models built since mid-June because they use R134a and do not comply with the EU directive.

Daimler says the vehicles are type-approved in Germany and should be allowed to be registered anywhere in the EU. France has argued that the ban is legally permissible under an EU law that protects the environment and public health.

France’s top administrative court will decide on Tuesday on whether the ban should be suspended after Daimler asked the court for an injunction.

“The stakes are big,” Jacques-Henri Stahl, president of the tribunal judging the case in the Council of State, told lawyers for Daimler and the French government during a two-hour hearing on Friday. “We’re at the heart of overlapping national and European issues.”

A lawyer for Daimler, Denis Garreau, said the ban affected 60 percent of the company’s sales in France.

So far France is the only EU government to stop registrations of cars using the old refrigerant.

Reuters contributed to this report