THE National Asthma Council Australia has found the Hyundai i30 is the only model in Australia’s top seven most popular cars to come standard with both particulate and activated carbon cabin filters.

The National Asthma Council says that the lack of cabin air filters is both a health issue and a safety risk, given reports of accidents caused by drivers experiencing asthma symptoms or sneezing.

Since the previous review in 2013, none of the top seven models have added cabin filtration. Even if they do, the latest review found that even where filters are standard, no manufacturer mentioned them in new car brochures.

As a result, the National Asthma Council has called on major car companies to improve air quality inside vehicles to lessen the risk of driver or passenger asthma attacks. 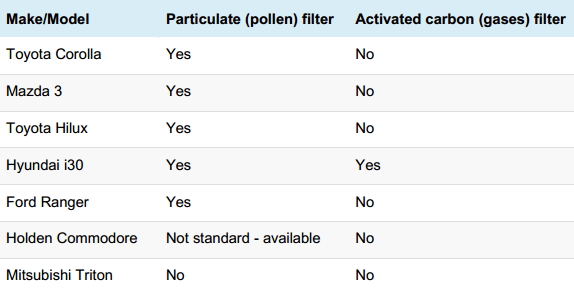 “In Spring, in particular, asthma attacks may be triggered by pollen allergens that could be reduced in a car by having effective filters in place,” she said.

“Allergy symptoms of congested sinuses, runny and itchy noses, and itchy eyes can also be a distraction to drivers and both asthma and hay fever cause fatigue, adding to the difficulties sufferers face when travelling.”

More than 2 million Australians are impacted by asthma, which can be triggered by pollen, exhaust gasses and other airborne pollution.