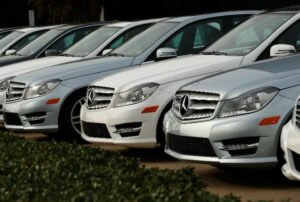 the government to lift a controversial ban on the registration of several Mercedes-Benz models that led to a clash between Paris and the luxury German carmaker over European environmental rules.

In a sharp rebuke to President François Hollande’s government, the Conseil d’État, which oversees the legality of government decision-making, issued a preliminary ruling backing an appeal against the ban by Daimler, owner of the prestigious brand.

The council said the vehicles concerned could not be regarded as a serious threat to the environment and ordered the resumption of their registration within two days, while it conducted a further study on whether to overturn the ban permanently.

Daimler protested furiously over the government’s move, which has hit more than 5,000 sales since June, when France refused to allow the registration of four new Mercedes models that use an air-conditioning refrigerant outlawed by the EU on environmental grounds.

To date, France, whose own automobile industry is struggling against recession, is the only EU government to take such a hard line against Daimler. The government has made little secret that it was using the issue to signal to Berlin that Germany’s powerful car industry should not be allowed to bend EU rules.

Paris was among EU governments upset when Angela Merkel, the German chancellor, blocked a move earlier this year by Brussels to impose tougher emissions curbs that would have had a heavy impact on Germany’s luxury carmakers.

The French government last month invoked an EU “safeguard procedure”, which allows member states to act unilaterally to prevent a serious risk to road safety, the environment or public health, after a lower French court had ordered a temporary lifting of the Mercedes ban pending a review.

The council said it “seriously doubted” the legality of the use of the safeguard procedure. Mercedes’ French arm said it welcomed the decision “which recognises our legitimate rights”.

The move halted the registration of Mercedes A, B, CLA and SL models for six months after Daimler was permitted by KBA, the German automobile authority, to continue to use an air-conditioning coolant called R134a in the cars, despite an EU ban for new model approvals imposed from January because it is a highly potent global warming gas. All pre-existing models are allowed to use R134a until 2017.

Daimler argues that the most commonly used replacement coolant, called R1234yf, is dangerously flammable, although it has been approved by the EU and accepted by the vast majority of other manufacturers. So far only Toyota has said it had taken the “temporary measure” of continuing to use R134a “to alleviate the concerns of our customers”.

Tuesday’s ruling will also prove awkward for the European Commission, the EU’s executive arm, which itself is reviewing France’s invocation of the safeguard procedure.

“We have taken note of the preliminary ruling today of the Conseil d’État. While we will look at it closely, it does not have a direct bearing on our ongoing deliberations in relation to this issue,” said Michael Jennings, spokesman of the European Commission.

The commission has demanded that the KBA justify its decision to let Mercedes continue to use the banned coolant. EU officials said preliminary results provided to the commission from tests carried out on the new coolant by the KBA did not indicate it was any more flammable than other coolants.

The commission will decide within the next two months on whether to take formal action against Germany for infringing EU rules.