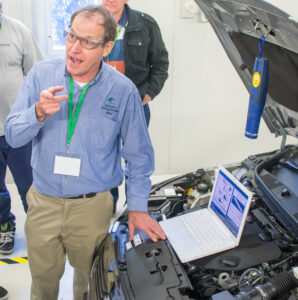 AUTO-AC training guru Grant Hand says the first consideration when working on climate control systems with variable-displacement compressors is that they are linked to the entire engine and vehicle management system, meaning any existing fault codes must be diagnosed, fixed and cleared before AC system diagnosis can begin.

“People need to know that they are linked to the total vehicle and engine management system,” explained Grant.

“When they are diagnosing a system they cannot diagnose it when there is an engine fault or a vehicle fault present.”

Variable-displacement compressors (VDCs) are fitted to most late-model vehicles as manufacturers chase fuel-efficiency gains. These compressors use a fiendishly complex de-stroking system that makes them significantly more expensive to replace than the older type of pump. Instead of hundreds of dollars to replace, they run into the thousands. 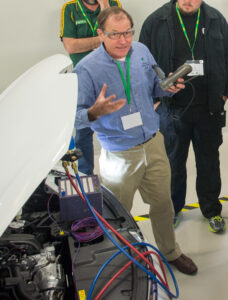 Grant said that AC systems using VDCs require more than just gauges to diagnose, because in de-stroke mode they will provide misleading readings.

“The diagnostics is different,” he said. “To the people out there who read gauges, forget it because the compressor is going to trick you when it goes into de-stroke mode – analysis can’t be done by the conventional systems of just reading gauges.”

Grant added that a VDC is also much more sensitive to shoddy servicing techniques, with the level of sensitivity being higher for mechanically variable units compared with those that are electronically controlled. Bear that in mind along with the cost of a replacement compressor and it pays to do the job right first time!

“The days of just sticking in a bit of gas are gone but people still do it,” said Grant.

“If a technician was to not know what they are doing and for some reason there is an issue with a comeback for a compressor failure, then they may be digging their hand into their own back pocket to pay for another one, which is the biggest killer and will destroy a business.” 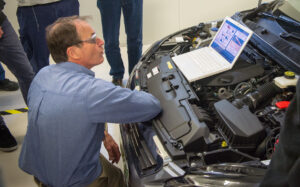 Grant said it important to understand that VDCs exist because of their energy-efficiency benefits.

“The old pumps were driven at 100 per cent and used a lot of fuel when they didn’t really need to, especially under low heat load,” explained Grant.

“VDCs vary their displacement through a de-stroking mechanism that responds to air-conditioning load.”
Due to their efficiency over traditional compressors, VDCs are now the mainstream technology and Grant expects the vast majority of R1234yf systems to use them too. 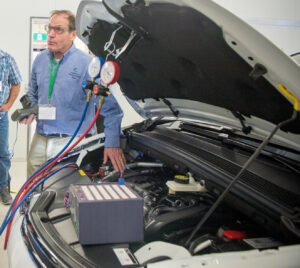 “These compressors will be the norm with R1234yf, which adds another complexity that you’d better know what you are doing and what the refrigerant’s doing because you need to first know the refrigerant and how that links with the pump and secondly what the whole system’s doing,” he said.

VDCs do have one thing in common with the non-variable type: Any system with a low refrigerant charge will still cause poor performance and imminent failure.

Grant explained that the sensitivity to low refrigerant “depends on whether it is a manual or electronic type variable compressor”.
“The manual type are very sensitive to lower charge rates, electronics to a degree are self-compensating – but only to a degree,” he said. 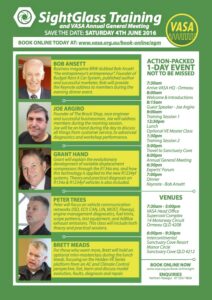 Even electronically controlled VDCs are far from failsafe, with some compressors – particularly those used on some European vehicle brands – “very, very sensitive to doing the right thing”.

But over and above all that, Grant emphasised the fact that AC systems with VDCs are closely linked with the vehicle’s various electronic management systems, making it essential for technicians to be aware of how the compressors work and how they are linked to the rest of the vehicle.

“All codes must be cleared and rectified before you even go near the air-conditioning, otherwise you’re going to be chasing your tail and looking for air-conditioning faults that don’t exist because the system’s been thrown into de-stroke mode due to an engine management problem,” he said.

“Everything has to be cleared and when you service them they are linked with vehicle management and electronic climate control, so you need to know when you work on them what those linkages are otherwise you can be asking why the system’s not performing when the system doesn’t want to perform because there is not enough load.”

Grant’s session at the unmissable SightGlass Training and VASA AGM event on June 4 will cover VDCs in detail.

The session is sponsored by Ashdown-Ingram, with an equipment package valued at more than $2000 up for grabs in an exclusive prize draw. 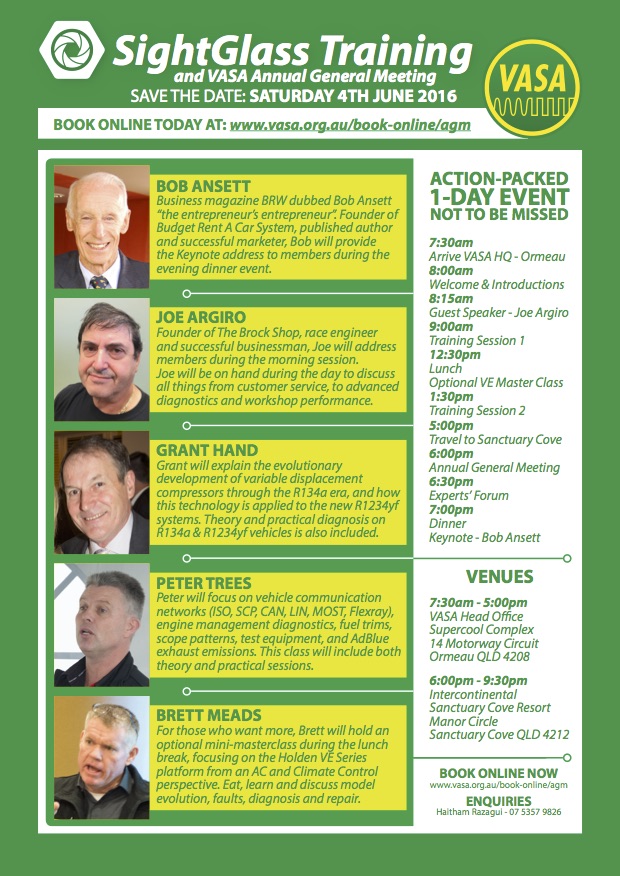