The slow uptake of R1234yf on new light vehicles in Australia, largely caused by manufacturers exploiting a lack of regulation around their role in the HFC phase-down, has hit the headlines in mainstream media this month with articles in The Guardian newspaper and on the WhichCar website under which major automotive publications including Wheels Magazine are represented. 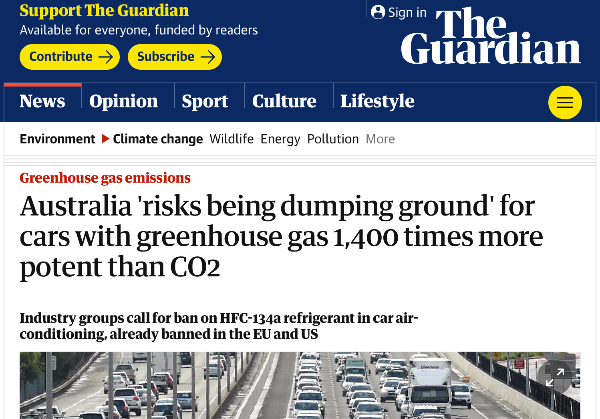 As reported in SightGlass eNews, two reports have highlighted the automotive industry’s role in reducing HFC emissions, including one from the International Energy Agency (IEA) and the Cold Hard Facts project commissioned by The Department for the Environment and Energy.

The Refrigeration and Air Conditioning Contractors’ Asociation (RACCA) also weighed into the debate, with an article titled ‘Taking the Montreal Protocol For a Ride‘ pointing out that “over-reliance on market mechanisms to correct failures creates externalities”.

“Inaction from the government to address this issue via a direct ban on the ozone-depleting gas means that while the outlook for Australia to transition out of HFC-134a use by 2020 is positive, it remains an improbable achievement.” 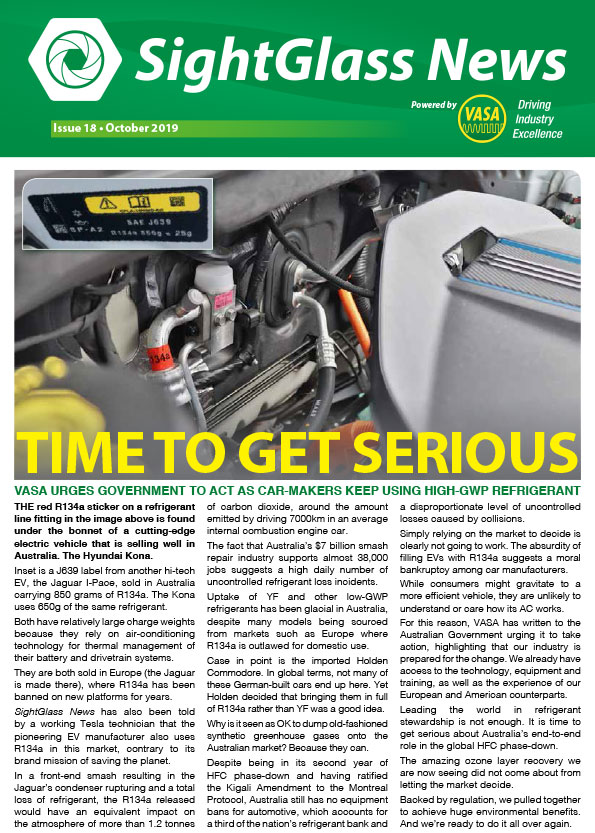 As per the front page of SightGlass News issue 18, VASA contacted The Department for the Environment and Energy in October raising concerns over this issue, prompted by the number of electric vehicles entering the country using R134a and therefore making a mockery of these models’ purported environmental credentials.

In its response, The Department said that it was “monitoring the uptake of low GWP refrigerants in vehicles in Australia and around the world” so that it could “advise the Government on this”.

“The Department will be meeting with automotive manufacturers in the coming months to discuss their progress and intent towards moving to low GWP replacements for the Australian market, and options to increase the rate of change”.