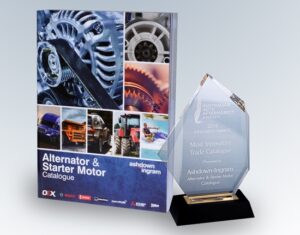 VASA members Ashdown-Ingram and Redarc received three Australian Auto Aftermarket Awards between them at the recent Aftermarket Expo in Melbourne – and were finalists for two more.

Speaking with SightGlass eNews at the Aftermarket Expo, both Ashdown-Ingram marketing specialist Christine St. Ange and Redarc MD Anthony Kittel said they were pleasantly surprised when their companies were announced as winners.

Queensland-based distributor of automotive electrical and thermal control parts Ashdown-Ingram won two categories in the 2015 Innovation Awards: Most Innovative Trade Catalogue (for the Alternator and Starter Motor catalogue) and Most Innovative Direct Marketing Campaign (for the Workshop Assistance Programme). 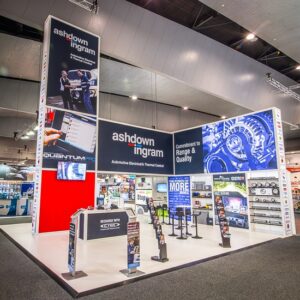 A strong focus on ease of use, creating a resource rather than just a parts listing and increasing confidence in correct part selection clinched the Trade Catalogue award for Ashdown-Ingram.

A record 188 entries from 90 companies were received for the 2015 Innovation Awards. 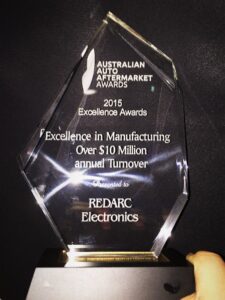 Redarc was also a 2015 Innovation Awards finalist in the Digital Marketing Campaign category for its Facebook promotion of the Tow-Pro electric trailer brake controller.

This year, Redarc has also made the Technology Application category shortlist for the Manufacturers’ Monthly Endeavour Awards, while its Manager30 battery management system and Tow-Pro are finalists at the Good Design Awards in separate Product Design categories.

It is safe to say Redarc is going to need a bigger trophy cabinet.

Mr Kittel told SightGlass eNews the awards provide not only great brand exposure and awareness for Redarc, but help with attracting quality staff.

“People want to work for a winner,” he quipped.

AAAA executive director Stuart Charity congratulated the award winners and thanked them for their contribution to the auto aftermarket.

“The Australian aftermarket is recognised for its high technology, high quality products. This 2015 Awards winners list clearly reinforces that fact,” he said, adding that the AAAA Awards are unique in specifically recognising excellence in innovation in the Australian automotive aftermarket.

“As these biennial Awards are run in tandem with the Expo, the next chance to score a win will be in 2017.”

As the Sydney Convention and Exhibition Centre at Darling Harbour is under refurbishment, the 2017 Australian Automotive Aftermarket Expo – and the Awards ceremony – will return to Melbourne.